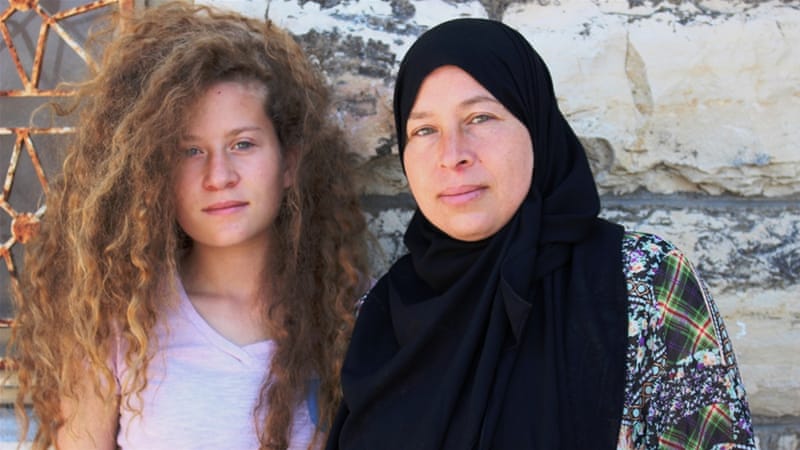 The world’s attention is on the jailing of Ahed Tamimi, the 16-year-old Palestinian from the West Bank village of Nabi Saleh. Ahed was imprisoned last month after slapping and kicking an Israeli soldier who had intruded onto her family’s property—just hours after her cousin was near-fatally shot with a rubber-coated steel bullet. But the person who is getting less attention also is a hero—Ahed’s mother, Nariman, imprisoned the same day for posting a video of her daughter defying the soldiers.

I imagine the day when Ahed was born, Nariman gazing down at her baby’s sky-blue eyes. The daughter with eyes like tiny, sparkling gems would soon be given the name Ahed—prophetically meaning “the oath.” I can picture Ahed’s tiny hand holding onto her mother’s index finger. As she nurses Ahed, Nariman strokes her forehead lightly and gives it a light kiss. She never wants anyone to hurt her precious baby.

Like mothers everywhere, Palestinian women cherish their children. They feed them nourishing meals, try to teach them good manners and nag them about studying. They remind them every morning to brush their teeth and to put on a jacket so the morning breeze will not bother them.

As a Palestinian mother myself, at times I think I am too protective. If my son or daughter forgets a book or pencil case when leaving for school, I call a taxi and send the things to them if I can’t go myself. And if I forget to pack their lunch, I deliver it or make sure they get food another way. Mothers love unconditionally and sacrifice for their children, and Nariman Tamimi is one of those loving Palestinian mothers.

Yet, also like most Palestinian mothers, Nariman has had to accept the fact that she cannot protect Ahed or her three other children. Their home is in the West Bank’s Nabi Saleh, whose land Israeli settlers long have coveted and grabbed, piece by piece. Village residents are denied an ordinary, let alone a decent, life. Sent only to protect the illegal settlers, Israeli soldiers barge into their homes at night, as they did when they seized 16-year-old Ahed at dawn December 19. Nariman could have prevented her children from watching a horror scene on television, but she couldn’t protect them from violence in their own village and home. Nariman and her family have no options and no escape. Her children come face to face with soldiers whose icy eyes and guns slung over their shoulders radiate venomous intent. This is the atmosphere in which Nariman and her family grew up.

In fact, the Tamimis and their town (most of them members of the same extended clan) have protested the injustices since 2009, choosing to resist rather than tremble in fear. Nariman, in particular, has paid a heavy price. She has been hospitalized after heavy exposure to teargas, arrested, and confined to jail or home for days. (In 2010, Nariman and her sister-in-law, Manal, spent 10 days in prisons where they were beaten repeatedly, strip-searched and held for two days without food before being dumped at the side of a road.) Her husband Bassem has been imprisoned repeatedly, and her oldest son Wael was seized in 2012 when he was 16, Ahed’s age now. Nariman told Amnesty International at the time how she witnessed her son’s arrest: “I saw him being dragged violently by a soldier who put him in a jeep,” she said.

One of the most symbolic accounts of Nariman’s defiant, feisty spirit was provided in 2013 by author Ben Ehrenreich: “A blast of ‘skunk water’ from Israeli cannons knocked Narman off her feet. Moments later, she was standing defiantly, letting the cannon soak her and waving a Palestinian flag at the truck’s grated windshield. An hour or so later, smelling of skunk and shampoo, she was serving tea to a dozen protesters.”

And now, Nariman has been jailed along with her daughter. Why? Simply for filming Ahed’s bravery and posting it on social media.

I have often pictured myself in Nariman’s place. This powerful woman, whose daughter was defending her home by challenging the soldiers who invaded it, didn’t panic. Instead, she used the camera on her phone to document the scene—then shared it with the world. She was on a mission to expose the daily harassment perpetrated against the villagers and document the unarmed status of both Ahed and her cousin Nour. Would I do what she did? I hope so. If it weren’t for Nariman’s bravery and clear-headed thinking, Ahed’s story would not have reverberated with the lightning speed it did. Yes, Ahed was fearless in confronting those soldiers, those intruders. But Nariman was a hero too, who suppressed the fear and urge to protect that must have raged through her body and instead stood with her God-given strength to film the scene. As her husband Bassem told Al-Monitor:

“Since there is no safe place in Palestine for us to send our children to, we need to teach them to be strong, get over their fear and resist.”

I try to picture my own 12-year-old daughter in Ahed’s place. Would she choose to do this? Would I encourage her to do so, or even support her? Honestly, I don’t know. But I do know that while my children are a part of me, they are a part of this holy land as well.

They and all children in Palestine grow up into a world in which they learn names of warplanes hovering above and tanks on the streets, taking the lives of children simply trying to play. At times, when they were younger, my children would look into my eyes and ask me to “make the planes go away.” Their faith in my motherly powers is quite staunch. Just like Nariman, the icon of power in Palestine, I never want them to think otherwise. But I know I cannot.